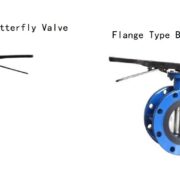 Butterfly valves are not only widely used in general industries such as petroleum, gas, chemical, water treatment, but also in the cooling water system of thermal power plants. Wafer and flange are two connection methods. Flanged butterfly valve has flanges at both ends of the valve body, which are connected with pipe flanges. The wafer type butterfly valve body has no flanges at both ends, only a few pilot bolt holes, and the valve is connected with the flanges at the ends with a set of bolts/nuts. The clip-on is cheap and lightweight. When choosing imported valves, use the wafer type as much as possible, which is cheap.
Wafer-type valve bolts are long in length and require higher construction accuracy. If the flanges on both sides are misaligned, the bolts will be subject to greater shearing force and the valve will easily leak.

Flanged butterfly valve seals are relatively more reliable, but the cost of the valve is relatively high.

With a Wafer valve, a longer bolt or threaded rod is used that passes right through both flanges and the valve. This pulls the flanges together which holds the valve in place. 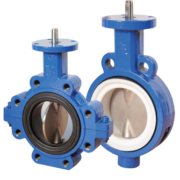